What is TypeScript and why should I use it#

The name TypeScript comes from the fact that the language is basically Javascript with type checking, but on top of that it supports all of the newest Javascript language construct that are not supported by Panorama.

How to install TypeScript#

That's it, after these three steps you are ready to start using TypeScript.

Visual Studio Code supports TypeScript out of the box. For other editors you might have to install a plugin to get language features (for example Sublime TypeScript plugin, available through Sublime Text package manager).

How to set up TypeScript for your dota addon#

TypeScript requires a tsconfig.json used to configure it for your project. Put it in your addon's content/panorama directory. You can adjust all settings yourself, but I usually have this set to the most strict settings. My preferred configuration:

To illustrate why I like using TypeScript for modular UI I will walk through a small example. We will be making some hero portraits with player name and a healh bar: 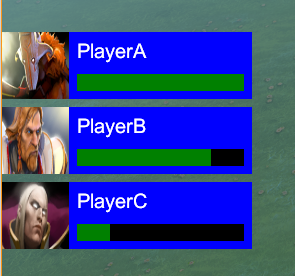 Since this tutorial is about TypeScript I will just quickly give the xml and css, this is standard stuff:

As you can see the XML of this part of the UI has a snippet containing the XML of a player portrait containing a hero image, a label for the player name and a health container and health bar inside that container. The CSS applies some simple layout to this.

Writing TypeScript for your UI#

First we want to define a class of our UI and to link that to the XML. We do this by taking an existing panel and wrapping it into a typescript class, as follows:

Nothing too exciting, we basically create a new ExampleUI object in ExampleUI.ts from the context panel, so this entire XML file is now an instance of the ExampleUI class. If you build this by pressing ctrl+b in Sublime, you will see it creates a new compiled ExampleUI.js file with the same name. This compiled file is loaded by Panorama. If you load your game mode at this point you should see a print in console printing your UI panel.

Now let's create a class for a hero portrait. In this case we do not wrap an existing element, but instead create a panel in the constructor. To do this we do still need a parent panel, so we require that as parameter for the constructor, as well as the hero name and player name. After creating a panel and loading the snippet into it we look up some of its child elements and store them for later.

This is saved in a second file PlayerPortrait.ts which compiles to PlayerPortrait.js. Therefore this file is also included in the scripts section of the xml (see above).

The constructor simply creates a new panel and loads a snippet into it, and then sets some default values. The class also defines a SetHealthPercent function that manipulates the health bar.

Your UI should now look like the screenshot we set out to make at the start.

Now this UI is not very useful for an actual game, so let's do something a bit more complicated. We want to save the player portraits and then whenever we receive an event that a player's HP has changed we want to retrieve the proper PlayerPortrait instance.

One of the advantages of TypeScript is that you can explicitly define which events you receive and what their contents are. We define the HPChanged event as follows:

Putting these together our ExampleUI.ts file now looks as follows:

We simply bound a handler for the hp_changed event in the constructor of our ExampleUI, and whenever that happens OnHPChanged is called, which looks up the player portrait in the map and calls SetHealthPercent on the portrait.

To conclude, I hope to have convinced you TypeScript helps to write readable, modular UI scripts in Panorama. TypeScript helps you by finding typing errors before you compile, and even prevents errors by taking scoping into account. On top of that the code completion for the panorama API is very useful. The more I use TypeScript to write Panorama, the more I am impressed by how useful it is. Hopefully you give it a try and discover for yourself.