Typescript is a powerful tool that we can use to improve our ability to properly script files for Dota 2. Using tstl (Typescript-to-Lua), it automatically generates a Lua file for the game to use for each file you're working on - this process is completely automatic from the moment it starts up.

Typescript can work well with most editors using plugins, however, VSCode is recommended as it comes with Typescript support built in, and is a very powerful editor.

First, since Typescript uses Node.js, it must be installed on your computer. You can download NodeJS from here. Simply choose the recommended version, which is the latest stable version. Download and install it with its default configuration.

Next, navigate to the Typescript template. This template has most of the files of a new addon configured for you, along with Typescript support. There are two versions to use the template:

Cloning the repository meaning making a copy of it on your computer. This can be done by clicking on "Code", then on "Download Zip", as shown here: 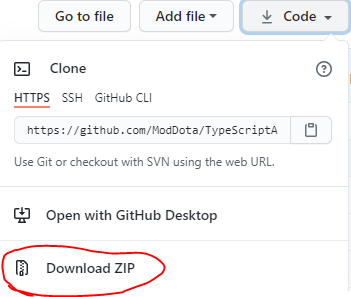 You can then extract the ZIP anywhere you want. However, do NOT put it inside your Dota 2 folder. For example, I placed it in my Desktop, inside a folder named "Dota 2 custom games". The folder that becomes extracted is named TypeScriptAddonTemplate-master, so just rename the folder to more correctly reflect your custom game's name. For the sake of this tutorial, I named it typescript-example.

Creating a Typescript-based addon in Dota#

Now that we have the files on our computer, we can set up a new addon game very quickly. There are a few steps remaining before doing so:

Save and close the file.

Make sure there is no folder with that name inside both the game/dota_addons and content/dota_addons of your Dota 2 game folder. The installation process will create those folders for you. If the folders exist, delete them first, or change the name in package.json to something else. 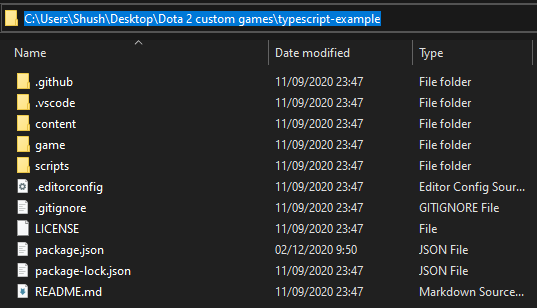 Symlinked folders are copies of each other, where any action done on one is also applied on the other folder. Therefore, you can simply work on your conveniently placed folder (Desktop/Dota 2 custom games/typescript-example in my example), and it will automatically be applied on the Steam Dota 2 folder as well.

Most of the structure for Typescript is identical to a standard Dota addon, such as having the scripts/npc/ folder.

Note the src folder in the project's root. This is where you create and work on your Typescript files. When they're compiled, the resulting Lua files are placed in the appropriate locations, such as /game/scripts/vscripts/ for files produced from /src/vscripts/. You can add additional folders inside those folders, which will keep the same routing in the output location.

You can change the structure of the folders inside the addon. However, you might need to adjust the output paths to match those changes. Some changes might break the mod, as Dota expects a specific structure to be set up (such as game/scripts/vscripts).

In src, you'll also find the common folder. This folder is extremely useful to storing interface decalarations that are shared between game logic and panorama, such as events and nettables, among other custom declarations such as enums. This folder should only include d.ts files.

Occasionally, Valve will release new API or changes to existing API, usually at events and major patches. Your Typescript project will not automatically adjust to those changes as they need to be filed and typed first, which is usually done by the community who maintain Typescript template. However, when a new update is announced for Typescript for Dota 2, you can easily update your project. There are two ways to do so:

The project will update to the newest version automatically.

Per writing this tutorial, the Typescript template comes with a few examples to show how game logic is done in Typescript. I recommend keeping those files for reference until you're more comfortable with Typescript.

You can see the how the examples apply in your addon:

We have a dedicated Typescript channel in our moddota Discord for every Typescript related question. Feel free to join and ask anything and we'll be happy to assist.

Check out the Abilities in Typescript tutorial, which will show how to set up and code a basic ability to use in the game.